Early March our baby chicks arrived and I became a mother hen in training. Since then, my husband and I have found our stride as chicken owners. The run is secure, we have automatic feeders and water systems (because, hey, we still have day jobs) and the chickens find safety in a small coop while we complete the larger one.

While the chicks were in the brooder,  we spent evenings entertained by Chicken TV which was better than actual television. We not only spent time watching them, but holding them and letting them climb over us while discussing the different kinds of eggs we’d expect.

Just before transitioning them from the brooder to the coop, the Buff Orpington pullets loved nestling into our laps. I enjoyed watching as one would nestle down as I ran my hand gently over its head down to its tail. It was so amazing seeing how much these birds had grown in a matter of weeks.

Yes. Plural. I’m sure there are two…maybe more?

The moment crowing happens I immediately try to identify the owner by racing out to the run quickly, but calmly as I don’t want to frighten everyone.

Scanning the 16 potential suspects for the roo, I see no evidence. They all quickly turn back to their scratching and pecking…occasionally looking over their shoulder:

A couple of mornings ago after letting the pups and chickens out at 5 a.m. The crowing began again.
I pressed up against the back window and watched in the twilight.

Soon I recognized two Buff Orpingtons crowing.. one right after the other and flapping their wings with pride as the glottal cackle reared from their yellow feathered throats.

Unlike the Mottled Javas and Americaunas, our Buff Orpingtons and Welsummers came from a hatchery….we ordered all female. And while I realize that there is margin for error, when you consider we ordered 10 Buffs, three which died within five days…and now two are roosters? Something’s up, or I have some bad karma to remedy.

I began consulting The Chicken Chick, YouTube, and my Facebook Group, Backyard Chicken Project. Apparently, one of the markings is the tail feathers. If they curl down and you have a “sickle” tail feather, you have a rooster.

This is how I came to name “Jackson”…the Buff who I originally thought was doing the crowing….all the telling signs…thick legs, big feet, tail feathers bending downward like a sickle….but I haven’t seen him, or her, crow.

I make time to sit in the run watching my Buffs specifically…and over time they all seem to have rooster signs. Could it be that the hatchery sent me all males instead of females?

I now have rooster paranoia. The struggle is real people.

As I heard the crowing again this morning, I chose to forgo going back to bed and took a camping chair and my coffee to the run.

I took a deep breath and for the first time in a couple of weeks took pleasure in the chicken antics: the scratching and pecking, the squealing at finding an oversized leaf, the pecking at the flowers on my boots, and the glaring curiousity as to why I’m sipping my coffee with suspicion.

I browsed my phone and found a video showing hens crowing...as I played it, the chickens listened attentively. Maybe someone would crow, simply to copy?

Perhaps I have a prideful feminist hen who refuses to give into her assigned role. Possibly, she’s choosing to copy the rooster representing the telling roo sign of that sickle tail feather. Or this hen was simply meant to be a roo, but it isn’t giving in until the bird gets the deserved assignment: that she is, in fact, actually a he.

If that is the case I respect that, and welcome it. How do I question nature?

Too many of us on this earth live lives for others….only because others perceive us to be a certain way, a certain person, personality…a certain gender.

And for a period of time, it’s easier to be what others expect. Until it isn’t. Until nature rears her beautiful head forcing us to own our identity. Either in a loud cheer or fearful silence.

As I review these dynamics, one of the suspect roos clumsily makes its way in my lap.

We looked each other over. I take another sip of my coffee and the bird settles down perching itself on my right thigh and finally resting its head on my left.

And just like I did weeks before, I run my hand gently down from its head to tail. The bird closes its eyes.

We’ll all figure this out eventually. 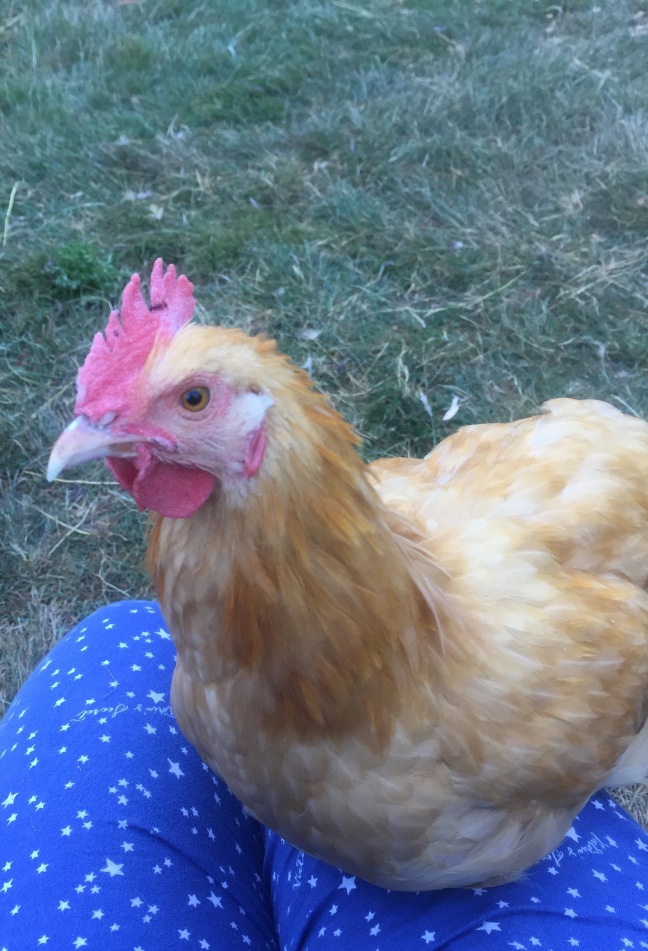