I’ve started this post in my head several times beginning the day I ordered our chicks from Meyer Hatchery. I wanted to share how I anticipated the arrival of 10 Buff Orpingtons and 5 Welsummers along with the anxiety of it all and the realization that I wasn’t prepared.

Well wait. I was, but my brain gets the best of me and I’m sure like any new mom, we want the best for our new little ones. I’m a first time chicken mom and I was a wreck. When would the post office call me upon their arrival? Will the box be chirping or quiet? (Please don’t let me get a quiet box) Do they have enough water? Can everyone get to the food? Why isn’t that one moving? Are they warm enough? Too warm? 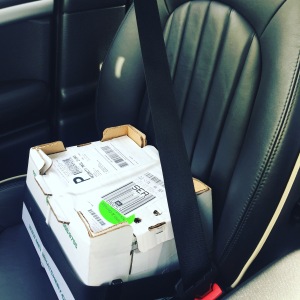 All chicken knowledge I consumed the weeks prior in preparation of their arrival just disappeared. Just keep the chicks alive….easy enough, right?

I was happy to hear them chirping from the box. And like any good mother, I had the car seat warming for them and I gently strapped them in for the drive home. In pure documentary fashion, I texted a quick pick of them all buckled in and sent it to my husband who was traveling that week.

“It’s official. You are now a crazy chicken lady.”

He had no idea.

Once I got the ladies home, it was time to place them in our homemade brooder. Here 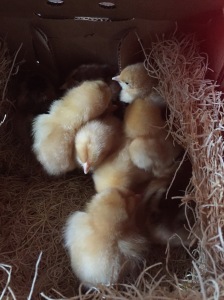 that knowledge which I thought escaped was coming back. The brooder had been prepared the night before and the thermometer read that the temperature was holding around 98 degrees. All the chicken prep reading I did said the temperature should be around 95-100 degrees the first week. If the chicks huddled underneath the light it was too cold, and if they strayed from the light it was too warm. What you want is to have the chicks form almost a perfect circle on the edge of the heat lamp.

I quickly picked each one up and placed them in the brooder after checking for “pasty butt” and attending to those affected. Before letting the chicks explore their new home, I dipped their beaks into the water I had prepared with electrolytes. Apparently, chicks need to be shown where the water is located and they take it from there. Fourteen chicks were now successfully drinking in the brooder and, for the moment, free from pasty butt, but one sweet girl wasn’t doing well.

After attempts to feed her water from a syringe, she seemed to perk up, but later in the day when I checked on the girls, she showed no sign of life. It was hard, but I know this is part of it. I tried to guess all the things that could’ve happened: the travel, the temperature, or perhaps she was smothered under her siblings. All terrible, but the truth is, death is part of this. I know this, but it doesn’t make it easy.

A few days later, the girls were getting the hang of their life in the brooder, but on day three, we lost two more of our Buff Orpingtons. I was baffled as two losses in one day could mean something was terribly wrong. Everyone was eating and drinking and I was tending gently to rid them of pasty butt twice a day. I began Googling “buff orpingtons keep dying” to see if there were other stories, but found no evidence of anything wrong. Several posters from the chicken threads I found simply stated “sometimes chickens just die.”

That night before my husband returned home, I spent hours hovering over the brooder, looking for signs of ill chicks. All of them seemed strong, except for one. She was the smallest of the bunch and I decided I would make it my mission to help her survive if I saw a change in behavior. Maybe sometimes chickens just die, but this mother hen was going to do everything in her power to keep the rest of these ladies alive.

That night I watched over the little chicks until they all one by one slowly fell asleep, not directly under the heat lamp, but in a perfect circle on the edge of the lamp. Just the way they should be.

Perhaps this mother hen knows how do take care of her baby chicks after all.

One thought on “Mother hen in training”